Surely you’ve passed the boarded up Burger King on Burnside. The preservationists don’t care [no one saves buildings built in 1977 – it’s either too soon or they’re not worth saving], it’s been on the market and off the market, and has acted as the “official eyesore” for the area for quite some time now.

But, back in 1978, it was included in the Portland Chapter American Institute of Architects’ Design Awards Program.

Seriously? A design award for a Burger King? That’s a real whopper [cough].

You be the judge:

So, what the heck happened? Not enough traffic? Too much riff-raff? Just out of the reach of the downtown area?

People weren’t having it their way?

And now it sits, abandoned. Click on the image for the larger size, with a not-so-hidden message: 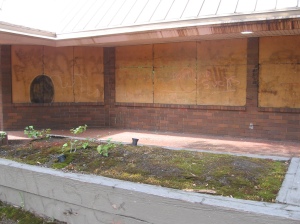 I have an idea: the “BK78 Condominium Project.”

Extra bonus bad vibe: a transient was crushed to death in the hydraulic trash compactor in the late 80’s. Supposedly, the man crawled in looking for thrown-away food (or possible just a place to sleep it off) when an employee threw a bag of garbage on top of him and flipped the switch. Although the homeless man’s cries were heard almost immediately, it was too late……

[Current image courtesy of Cyclotram. Be sure to read his post, How to walk the Ross Island Bridge and not die, if you’re lucky. Here’s a link to his Flickr site with some great local snaps as well.]

UPDATE (9/16/10): The Burger King has been demolished. Brian Libby’s Portland Architecture, Peter Carlin at the Oregonian and Sarah Mirk at the Portland Mercury all wrote great pieces about it and the whopper shenanigans that went on there.