Hello readers! This is a first for me – a cross-post. I wrote this for the National Trust for Historic Preservation and a promotion they are doing to compete for a portion of $100,000 based on the number of votes they receive. The post also appeared on their website here.

The National Trust is participating in the 2012 Pacifico Beer summer promotion, Make Adventure Happen, in which we are competing for a portion of $100,000 based on the number of votes we receive (voting instructions at the end of the post).

To raise awareness for the contest, they partnered with five preservation fans to highlight “Preservation Adventures” in cities and states across America. This week’s guest blogger is John Chilson from Portland, Oregon. John blogs about Oregon history at Lost Oregon and is currently writing a book on downtown Portland in the 1950s.

Despite the urban renewal projects during the post-WWII years — when whole neighborhoods met their demise from misguided planners, and perfectly functional housing succumbed to the wrecking ball — many of downtown Portland’s early architecture still remains intact. True, much has been lost (Portland once boasted the largest collection of cast iron buildings in the Western U.S.), but there are still many gems still standing and ready to explore.

Getting Here: Arriving at Union Station 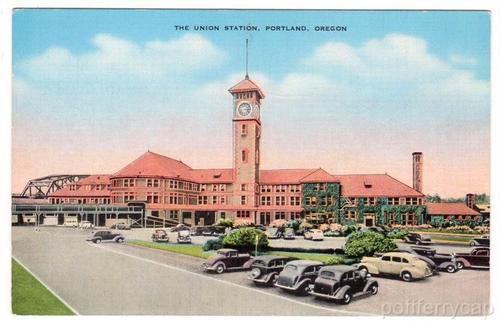 Downtown Portland is easily accessible by car, public transportation, walking or by bike. But if you’re coming to downtown Portland directly from out of town, start your trip by arriving by train at the wonderful Union Station. Opened in 1896, the structure was built in the Italian Renaissance style using brick, stucco and sandstone, and still deservedly garners attention. The clock tower is one of Portland’s most recognizable structures and the interior is well preserved. The station even boasts a small section dedicated to the station’s history.

Check In: The Heathman Hotel 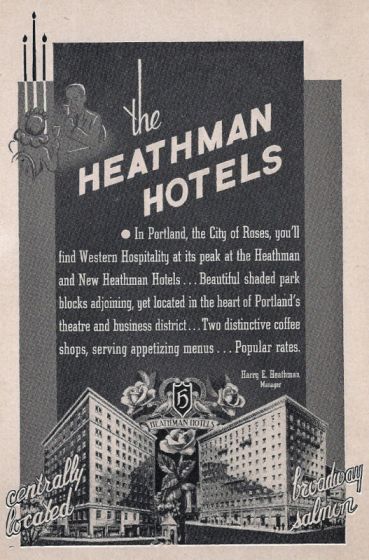 Once here, hop in a cab to your hotel: The Heathman — located right next to the old Portland Publix Theater (now the Schnitzer Concert Hall). Built in 1927 and located in the heart of downtown Portland, this 150-room luxury hotel is a member of the Historic Hotels of America and is on the National Register of Historic Places. Like many grand hotels in downtown areas, the hotel saw some rough times and seedy tenants in the 1970s before it was lovingly restored in the 1980s to its original glory. It’s also known to be haunted — so be sure to ask your concierge about the ghostly goings-on. 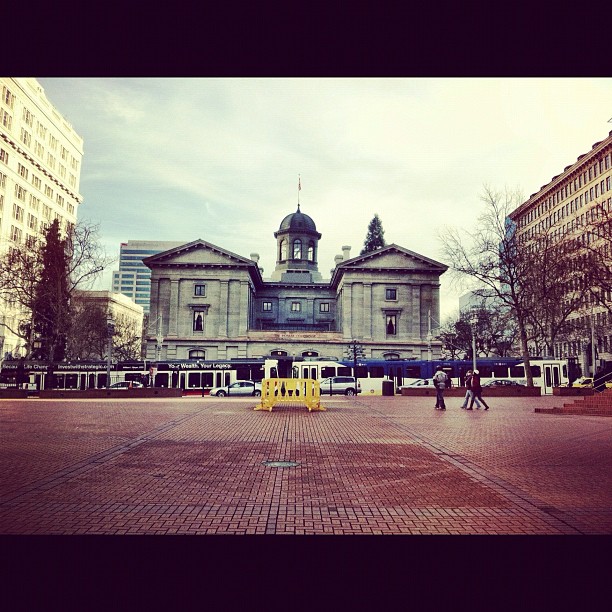 Once you’ve checked in, take a short walk to Pioneer Courthouse Square, also known as Portland’s Living Room. The square, named after Pioneer Courthouse, a federal building built in 1875 across the street from the square, was also the original site of the Portland Hotel. Demolished in the early 1950s, a textbook parking lot was built on the former site. An even larger parking structure was proposed in the late 1960s to the Portland Planning Commission, but thankfully they rejected the idea and wanted a public plaza. From that, the Square was built.

Nowadays, the square is the site of the annual Holiday Tree lighting, summer events such as movies and music, and the Holiday Ale Festival. The square also offers a fantastic sweep of some of Portland’s finest buildings. Stand in the middle and you can see the Pioneer Courthouse (see picture), the Jackson Tower (formerly The Oregon Journal Building, built in 1912), and the former Meier and Frank building (now Macy’s) designed by one of Portland’s most famous architects, A.E. Doyle.

Be sure to check out the original Portland Hotel’s original iron gates that greet visitors from the SW 6th Avenue entrance.

Feeling bookish? Walk east from Pioneer Square and stop by downtown Portland’s Central Library. Originally built in 1913 and designed by A.E. Doyle (there’s that name again) and extensively renovated in the mid-1990s, the structure is a wonderful example of Doyle’s work in Portland and also how older buildings can be retrofitted while keeping their historical integrity.

Lunchtime at Dan and Louis

After all this walking and exploring you might be getting hungry. If so, Dan and Louis Oyster Bar is the place to go. Yes, it’s a haul from the core downtown area — but totally worth it. In business since 1907 and located in Portland’s original downtown (the Skidmore District, where many buildings didn’t make the cut during the 1950s urban renewal-o-rama), the decor is part sea fare, part kitsch, and definitely worth a view.

Enjoy fresh oysters, the ambiance, a cold beverage — and soak up the history. And as a side note, around the corner is Voodoo Donuts. If you don’t mind waiting in the Disneyland-in-summer-like lines, it’s a Portland experience.

A walk through Portland wouldn’t be complete without a stroll across our many bridges. Each offer a unique history, easy walks and nice views of downtown. One suggested route is a walk across the Willamette via the Morrison (the original bridge was wooden and constructed in the late 1880s and replaced in the 1950s).

Once you reach the east side of Portland, stroll through the buzzing Central Eastside, or Produce Row, then back across the Hawthorne Bridge. Built in the early 1900s, the truss bridge with a vertical lift also carries many of Portland’s commuter bicyclists every day and its looks define the downtown waterfront. It also stops traffic when it rises and lets ships through. But remember, it’s all about the journey.

Once you make it back over the Willamette into downtown Portland, enjoy the Tom McCall Waterfront Park. Home of the massively popular Oregon Brewers Festival and other fests throughout the year, including Cinco de Mayo and a Bite of Oregon, it’s named after former governor Tom McCall.

However, it wasn’t always a park. Before preservation became a part of the fabric of planning and building, the park was once a highway (Harbor Drive) that cut through the city (as you can see from the postcard). During the 1970s, the highway was ripped out and the park was constructed. McCall was instrumental in many of Oregon’s environmental issues, such as Oregon’s Bottle Bill and public ownership of beaches, so it was appropriate the park was eventually named after him.

After a stroll through the park, the rest is up to you. Downtown offers many dining options, including blocks of food carts, the world’s best bookstore, and other entertainment options. If you still want to get your history fix, a visit to the Oregon Historical Society should be on the list.

This is by no means a complete tour, but it should give visitors a good sense of Portland’s past and its architectural legacy, and offer some great exercise while exploring a very walkable city.

You can support our preservation work by voting daily at www.PacificoAdventure.com. A contest code is required to vote — codes are available on specially marked packages of Pacifico beer, in bars and restaurants, by texting 23000, or by clicking “GET CODE” online.