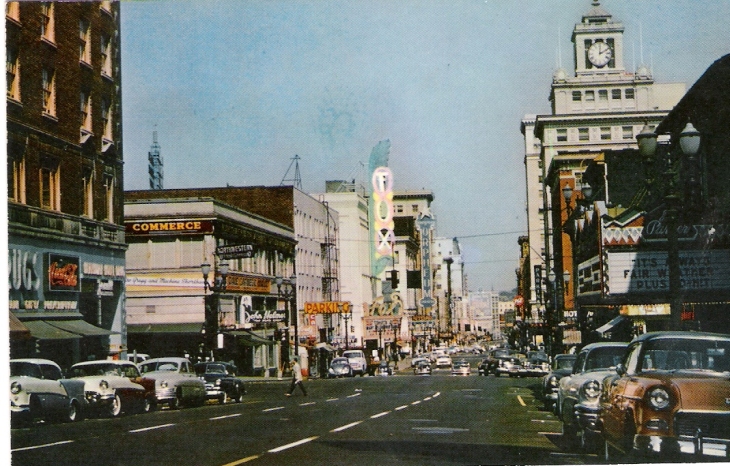 Broadway in Portland is kind of a boring stretch these days. On the other hand, it also has more trees than it did in 1955 when the above postcard was snapped [my clue was the 1955 “It’s Always Fair Weather” being screened on the theater on the right].

Of course, The Jackson Tour reigns supreme on this stretch of Broadway.

On the extreme left you can barely make out the bottom floor of the Heathman – the light blue exterior, Coca-Cola sign and Rexall Drugs sign.

As far as The Fox and Orpheum pictured – long gone – they were both torn down [obviously].

The Orpheum, according to Cinema Treasures, was

known as the Orpheum Theatre from 1929 until it closed in the mid- 1970’s. Its last operators were Mann Theatres who gave a seating capacity of 1,360. It was demolished for a clothing store to be built on the site.

Check out the 1965 photo and discussion on Cinema Treasures on the fate of  The Fox, and an amazing Flickr site that features Portland theaters.