Update 6/14/18: The Skulason home is for sale at $1.6 million. Marketing materials state clearly, as required: The house could be demolished. Could be. Hopefully not. Watching this one.

If you’ve never read Ralph Friedman’s books, get to it. His first self-published (before it was called DIY) book, Oregon For the Curious, cost $1.95 in 1965 and sold thousands of copies. If roadside places he covered back then were lost or almost lost, you can be sure that the hand-drawn maps he used and places he covered have long been paved over. His books are a joy, a tad esoteric, but primers for all kinds of cool and goofy Oregon history—and they’re pretty much at every used bookstore across Oregon.

His style wasn’t flowery; it was practical and informative. For instance, here’s his take on downtown Milwaukie from another, more current, book he wrote:

Visitors to Milwaukie sometimes ask for a walking tour brochure but there isn’t any; not that much of interest to see. Still, town has a few encouraging footnotes.

Yet, it’s kind of, well, true. At least back then when the book was penned. Until now, Milwaukie had a scorched earth policy with its historic buildings. The darling Oaks Pioneer Church in downtown Milwaukie? Moved, by barge, to Sellwood, where it’s loved and used for all kinds of events. (That one still hurts.)

However, in its defense, much of Main Street is still intact with shops and restaurants. And digging deeper, I’d have to start to disagree with Friedman on the lack of interest comment. If you dig a little deeper you’ll find all kinds of cool things, like a hidden lake park, an old grist mill, and the former site of Crystal Lake Park—a former dance hall, zoo and amusement park—for an apartment complex called, you guessed it, Crystal Lake.

My grandparents owned the property from the 40’s through the late 70’s. I lived there from about 1959-1974 with my grandmother. It was sold shortly after and then the apartments were built. My grandfather built a log church in 1945-46, but he passed away and my grandmother pastored the church till it was sold. Their names were Rev. Maurice & Edna Brock.

Milwaukie is a mix of “former locations” and some still standing. But, buried and hidden between 1950s tract homes, you can still find a gem.

Like the Bardi Skulason home. Skulason’s home has been described as a fine country home, where he “devoted his leisure to the growing of fruit and flowers.” It’s also a pretty nice looking piece of architecture, described accurately as Colonial Revival, built in 1913. 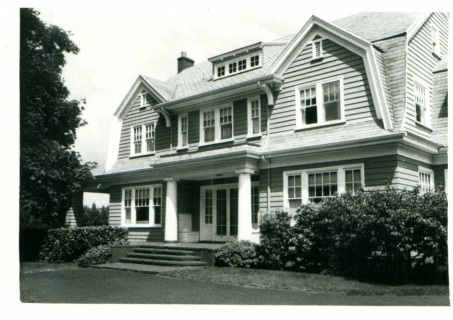 Snuggled behind Providence Milwaukie Hospital, the homes sits, safe from developers and probably curious seekers like you and me. It does represent, however, some of the history that still exists in Milwaukie and its next-door neighbors, Oak Grove, hanging on as testaments that history is everywhere, and like Friedman and his books, you just need to be more curious and dig a little deeper.