An early morning bike ride learning about local history is a great way to kick of a mid-spring Sunday.

That’s exactly how I spent last Sunday as I rode with a group of bicyclists as we explored historical Milwaukie, Ore., with Bike Milwaukie.

Since last fall, Bike Milwaukie has been leading casual, family friendly bike rides around town – mostly Milwaukie and SE Portland. The rides are fun, informative and a great way to meet people in the community. Most participants are from Milwaukie, some Oak Grove (cough cough), and some Portlanders. Age range is all over the map. Rides are third Sunday of every month.

The most recent ride was a historical ride around Milwaukie. Yes, Milwaukie has a history. A very rich history.  Often maligned (“Milwaukie is sooooo far out there.” It’s 15 minutes from downtown Portland) Or “there’s no ‘there’ there.” (The locals are working on it and there’s people striving to make it better. Main Street has seen some cool stuff come in, there’s a food co-op being developed, possible baseball and of course, light rail.) It’s got issues for sure, though. That said, Milwaukie’s history is interesting.

Founded in 1848 as a rival to Oregon City (another maligned but cool community) by Lot Whitcomb, the city also rivaled Portland for a while, but we know how that ended. The Willamette was a large player in the history, with riverboat  docks along the river and logging driving the economy. Problem was, the river just wasn’t deep enough for increased commerce and Portland won that battle.

Milwaukie’s riverfront was decimated in the late 1880s through the 1950s and is only now being looked at as a possible community gathering place. It has potential – the view is amazing, there’s room for a waterfront park and other amenities such as an amphitheater that could attract the locals and nearby residents.

But back to the bike ride.

The group met at Milwaukie City Hall (where they meet for each ride) and off we went to the first stop: Kellogg Bridge and lake. Once site of a sawmill and a lake that swam with salmon, the bridge will play an integral part of the light rail. Hopefully a pedestrian bridge can be added, connecting downtown to Island Station. There’s also talk of removing the dam at Kellogg Creek which would be wonderful for many reasons. 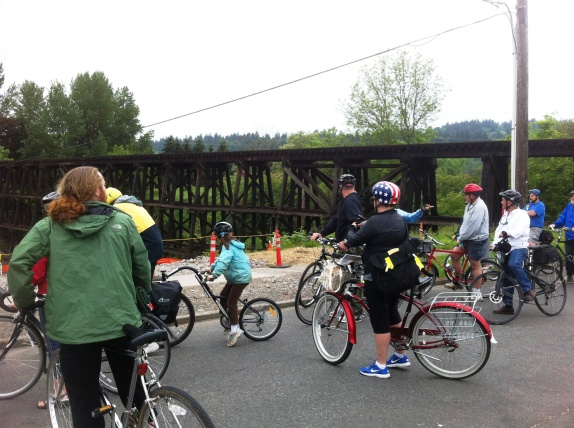 Up next was a ride through the tony Waverly neighborhood and some stunning 1920s homes built in the style I like to call “1920s silent movie star mansion.” I half-expected a Burns-like character to tell Smithers to release the hounds on us. However, the only run-in we had was with a homeowner getting their Sunday paper, who smiled and waved. (Rich people are friendlier than I thought.) 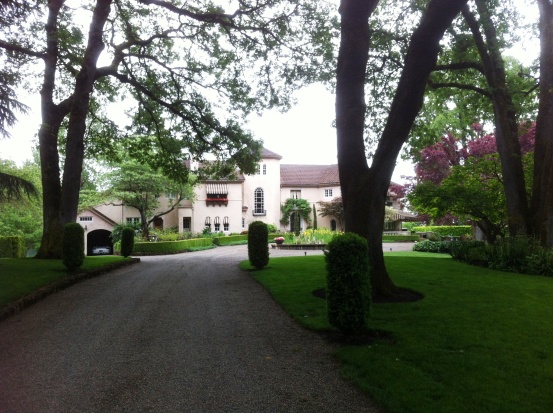 From there, the group stopped by the Milwaukie Pioneer Cemetery that houses some of Milwaukie’s first residents, including the above-mentioned Lot Whitcomb, Hector Campbell and early Oregon pioneers. It’s a real little-known charmer of a cemetery. 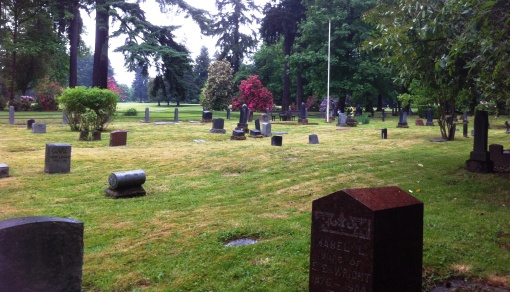 After a brief stop, back on our bikes to the major attraction: the WPA-built former site of the Oregon Highway Commission (now owned by ODOT). Built in 1938, the stone structure was constructed from a local quarry, supposedly by some of the same team that built Timberline. It’s been empty for quite some time but there’s talk of it being re-purposed as a brew pub as part of the baseball complex. 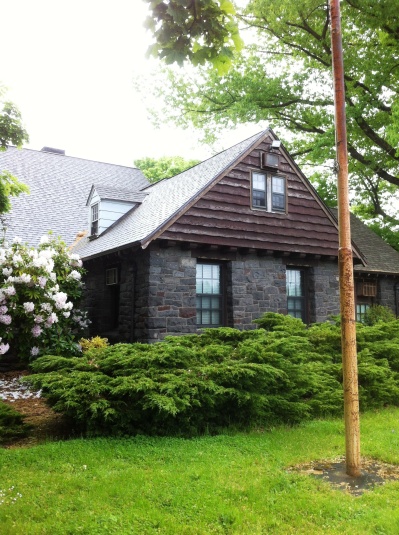 The group then hopped back on their bikes and casually rode through neighborhoods that had a mixture of bungalows, Spanish style, Victorian, and 1950s tract homes. Many of the homes had impressive gardens in the front yards, some had RVs and others had people on their porches drinking coffee and waving to the bicyclists. 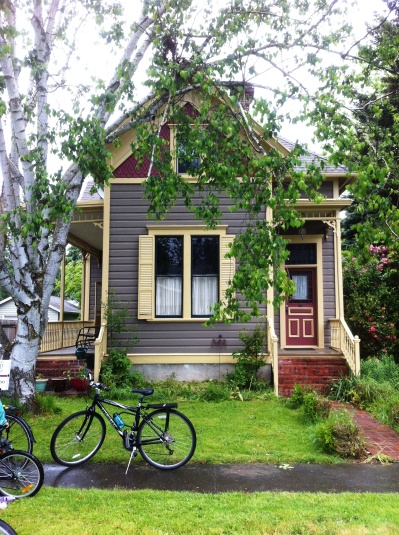 A history tour of Milwaukie wouldn’t be complete without a stop at the Milwaukie Museum. Unfortunately it was closed but we got the chance to check out the old Portland trolley on display and cool our heels.

Like the previous ride to the 3 Creeks in April (a wonderful watershed right under our noses that is being threatened with a highway) the ride was a fun way to learn more about the community, meet people in my community and learn what’s going on. The ride is part fun, part exercise, and part lots of community building. Kudos to Bike Milwaukie for hosting these rides. Go here to learn more.