Beginning in the 1940s, The Castle Jazz Band was a big deal in the Portland jazz Dixieland scene, named after the Castle jazz club in Gladstone. Here’s a description of the building from Robert Dietsche’s excellent Jumptown: The Golden Years of Portland Jazz:

In the thirties it was a roadhouse tavern made out of hand-cut stone by an imported French stonecutter, complete with turrets, arched windows, medieval doors, and a tower, which was removed later.

Here’s a shot of the structure taken back in 2005 before it met its demise: 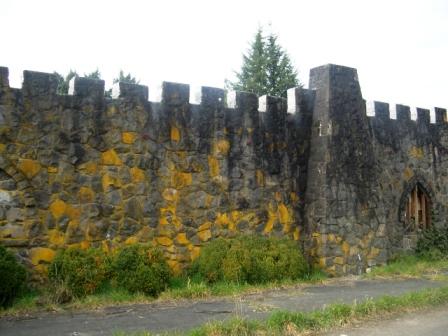 I’ve driven by occasionally and have watched the metamorphosis of the patch of land. According to the planner for Clackamas county that I spoke with a couple years ago, housing was planned for the land. Not a surprise.

As a former editor of a local builder magazine, I’ve seen homebuilders struggle the past couple of years – especially now with the economy. When I worked on the magazine back in 2003 their biggest problem was lack of land to build on. Now? Staying alive.

According to the signage, there are 10 lots available. Only two homes have been built. And damn, what a depressing sight.

Here are the two homes, surrounded by a castle-like brick wall to give the “community” some sort of exclusively: 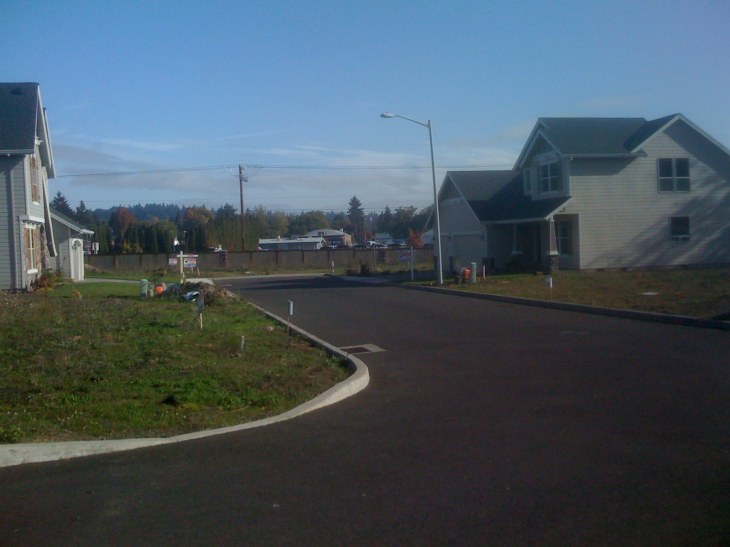 Here’s the other end:

One of the homes, built in that typical, boring “Northwest Style” stands vacant. Is that a hint of castle motif?

The kicker though is the signage. I just noticed that the faux gated community is called….wait for it…Castle Park. James Kunstler was quoted as saying once that developers like to call the developments they build after whatever tree or land they destroyed. True.

Here’s a closer look at the castle-influenced signage:

Snarkiness aside, I wasn’t terribly upset when the Castle was demolished. It was an eyesore, probably a hangout for lowlifes [I’m sure the neighbors loved THAT] and ya know, people need housing. And I feel for homebuilders – a lot of good people are losing their shirts. But I guess I shouldn’t be so shocked at how non-original and unimaginative the developers were with the land. At least the teenagers smoking pot and drinking booze will now have a nice warm house- and a wall to disguise any shenanigans- to break into and keep warm. It could be called a blueprint of The Atlantic piece last March on suburbs as the new slums. At least the Castle had some history behind it, some weird semblance of culture. Castle Park? Instant slum.

Here’s the Googlemaps view. Photo taken after the castle was demolished but before fence and housing were built:

Then/Now(ish): The Empire Building in Pendleton, built in the early 1900s, described as Italianate and listed on the US National Register of Historic Places.
Yesterday evening turned out to be nice, so a walk was in order. Some cool houses tucked between Holgate and Foster.
Flashback Friday (wait, it's always flashback something around here).
PSU Food Carts, 2014. (Remember that filter?!) #pdxfoodtrucks #pdxfoodcarts
The American Brush Company building on 116 N.E. Sixth Ave. Built: 1909. Mural still going strong. It's a solid piece of architecture. Love those windows. #pdxarchitecture #portlandhistory #brick
The Marco Polo Motel on N. Interstate featured “individual room temperature control, free local telephones, tub and shower baths,” and 5 minutes to downtown. Still hanging in there (under a different name, natch). Stumbling distance to the Alibi!