Seriously, I love the fact that Oregon is lousy with small towns that haven’t changed much over the years. This summer we’re heading to Colorado, which will bring us through my favorite part of the state: the eastern side. I love the desert, the geography of it, the land, the small towns of the I-84 as you leave Oregon and travel into Idaho. Don’t get me started on the ghost towns.

But, I’m getting ahead of myself. A little closer to home [Portland metro] is Tillamook. My introduction to Tillamook was second-hand stories from The Moneychangers and their nightmare gig there. Rock, roll and lots of booze no doubt.

I’m guessing the town doesn’t look much like this anymore: 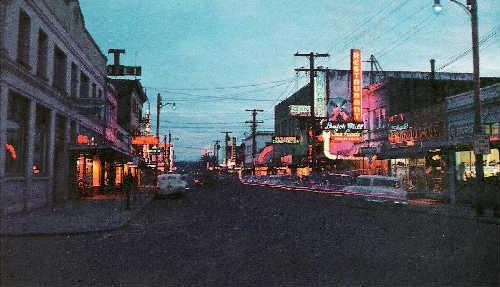 And a close up of Dutch Mill Seafood and its glorious signage:

Recently discovered images of a long-gone ultra-modern home in Oak Grove, Ore. Near Oatfield and Roethe (for you locals). Any ideas or clues?
Oak Lodge Library has a solid Oregon history section, from older books, zine-like, self-published accounts of the Oregon Trail to dense tomes of building inventories. #oregonhistory #helvetica #80sdesign
This was the last remnants of the long-gone trolley that came through downtown Oak Grove before the 1950s and was part of the station. When the new high school was constructed it was cast aside and many in the community wondered what would happen to the obelisk. It's been refurbished as a light in front of the school. Nice touch! #adaptivereuse #l#lightingdesign #placemaking #publicrealm #oakgroveoregon
Nice, old Oak Grove home still hanging in there (and it's for sale). Originally built in 1911, the William Cedarson Home, a 2-story, foursquare home, was typical of the area back in the day. #oldhomes #oldhouselove #clackamashistory #portlandfoursquare #archi_ologie
Strolled through Central Eastside's Industrial District today. 79 SE Taylor Street. Built in 1912 as a warehouse and also used for retail now. Couldn't quite make out that ghost sign! #portlandhistory #portlandarchitecture #secentralpdx #secentralindustrialdistrict #brick
Beer + wall map + history = rad. SE PDX/Ladd’s Addition map at my favorite local (@baerlicbrewing).